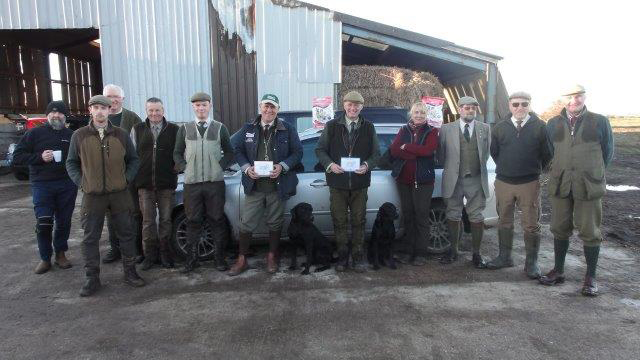 The Northern Golden Retriever Association Novice trial for AV Retriever was held on 24th November at Hy Fly Game Farm by kind permission of Mr Graham Holden and the NGRA team of guns.

The start was delayed, but two competitors still did not arrive in time so substitutes had to run. The weather was fine with a touch of morning frost.

The trial was walked up in blocks of root crops, bordered by ditches and adjacent stubbles and plots of maize. Steward of the Beat Kevin Hughes controlled the line and a steady flush of pheasant and partridge, with an odd duck were expertly dealt with by Trefor Richards’ team of guns.

Stevne Richardson and Derek Miller judged on the right of the line, with Sally Richardson and Paul Dixon to the left. 12 Labradors and 2 Golden Retrievers competed.

As the trial progressed some dogs were discarded, with the six best dogs called forward for longer cross-retrieves. However a runner that left the beet, for the refuge of a ditch saw four dogs unsuccessful. T

he judges located it and followed it a good distance along the ditch, before picking it and putting the dogs out. This left two dogs to complete all their retrieves. The trophies and prizes of Alpha performance dog food were presented as follows:-