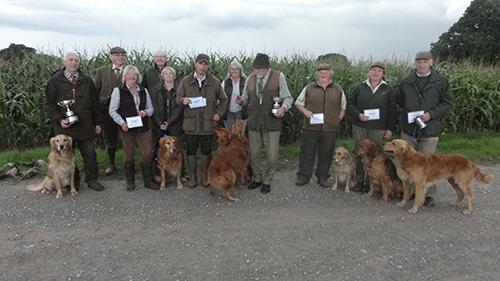 It was a fine, dry day for the trial at Bevecotes Park Shoot, near Walesby, Nottinghamshire.

Fourteen Golden Retrievers were competing, with handlers from as far away as Dorset, Scotland and Switzerland.

The two keepers Dave Goodall and Nigel Metcalfe had organised a day of mixed shooting, walking up set-aside cover and farmland with dykes and hedgerows for pheasants, together with an extended drive from a long duck pond in the middle part of the trial.

With few failures it proved a long day to test all the dogs and the judges Keith Helliwell, Graham Bird, Angie Cooper and Caroline Hewison eventually made seven awards.

Fortunately the weather stayed fine all day until the awards and prizes from Alpha Feeds were presented by Dave Goodall with lightning flickering as a storm approached.