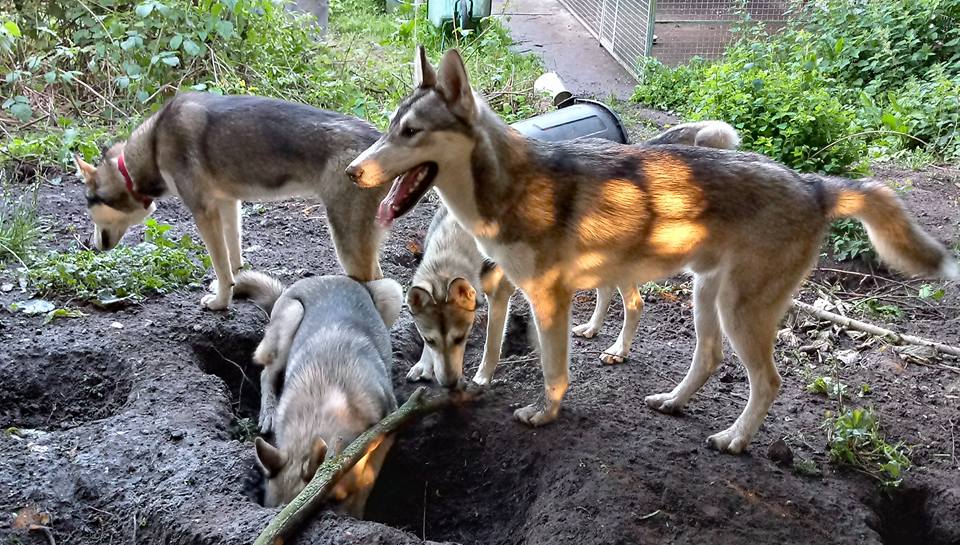 By Annabell DennisJul 24No Comments

Life with a Siberian Husky is fun, exhilarating and sometimes very, very frustrating.

This can be a challenging breed and they are certainly not the right dog for everyone. A lot of people are drawn to their stunning looks but Siberians are so much more than a pretty face. They are athletes, magicians, acrobats, opera singers, demolition experts and the cheerful slayers of mice, frogs and birdies.

Fact One: They are born to run

Siberians are hard-wired to run and to pull and to be part of a team (even if you are the only other member). It satisfies what is a very basic yearning in them. Rather than fight it, the happiest Siberian owners are the ones who roll with it, and allow their dogs to give them a taste of a life less ordinary, a million miles away from work, bills and the daily grind.

Your husky was born to be a sled dog. He wasn’t born to walk nicely to heel, be an agility star (unless it’s inconveniently of his own choosing – see Fact 3) or be a status symbol. Some of them can, and do, enjoy other activities but these activities have to be carefully tailored to take into account you’re dealing with a sled dog whose ancestors were carefully selected for generations pretty much only to run as far, and as fast, as possible.

You don’t have to head to the tundra or snow covered plains to do this. Happy sled dogs in the UK run on dry land pulling three wheeled rigs (in a team) or a bike or scooter (on their own). Some energetic owners even harness their dogs to themselves and run (cani-cross).

Fact Two: They are interior designers and garden re-modellers.

Siberian Huskies can have their moments of being extremely and randomly destructive. These moments are not always predictable or fathomable. Think six years of perfect behaviour then suddenly you come home to no wallpaper and a pile of sawdust where your coffee table used to be.

Couple this with their fairly unique theory of property ownership and you will often find yourself hunting for one of your shoes in the garden and not always being thrilled with the state it’s in when you find it.

Many huskies take digging to an advanced form a civil engineer would be proud of, and this is not necessarily always done outdoors. A friend’s dog lost his favourite ball underneath the sofa but it was okay as he dug through the cushions and base to retrieve it.

The sled dog determination that enables them to run for miles in challenging environments also makes them so cheerfully determined to overcome obstacles that many people have come home to find husky shaped holes in the interior doors, eaten window frames or whole sections of plaster board removed from partition walls.

Many people put this undesirable behaviour down to boredom or lack of stimulation but it’s equally often just a husky’s pragmatic approach to problem solving.

Fact Three: The Littlest Hobo had nothing on most Siberians

Huskies like to keep one eye on the far horizon and to them, yes, the grass is always greener on the other side of whatever is in their way. This is an advantage when it comes to travelling with your dogs as they are never happier than when being loaded into a vehicle for another exciting road trip but it also gives them an unfortunate degree of dangerous wanderlust.

Off lead activity is never a good idea for Siberians unless they are in a fully enclosed area (although still be careful as to some Siberians “fully enclosed” presumably comes across as some kind of a challenge) and they are quick to take advantage of even the unlikeliest escape route or split second of owner carelessness.

I chased a Siberian around the village in my pyjamas because a 28kg dog squeezed through a hedgehog sized break in the chain link fence. They appear to be able to dislocate their body to do this sort of thing.

You can usually spot the garden of a Siberian owner (and not just because of its moonscape nature and lack of natural lawn). The vast majority of Sibes need maximum security fencing designed, planned and then later reinforced and reinforced again with the understanding that if they do not try to dig under it or barge through it, they will at some point attempt to go over it.

Most Siberians do not constantly lose bits and pieces of their coats so, yes, the good news is there are occasional times during the year when you can wear black trousers that are not made of leather or plastic.

However, this is more than compensated by the fact most Siberians blow their entire coats out once or twice a year and lose about 16 normal dogs’ worth of the kind of fluff that can penetrate solid objects.

These are the terrible times you eat and breathe dog coat and most of your hot drinks start with picking a stray hair or two off your tongue. Even if your dogs are not allowed upstairs, your bedroom carpet will still be coated in it and your vacuum cleaner has probably burned itself out by this point. I’m far too dogged-up to be even remotely house proud but shedding can reduce even me to tears, especially when you are inexplicably unblocking soggy dog hair out of the plughole (do they even ever go near the sink?).

Like with most things Siberian, there appears to be little rhyme or reason with the shedding, at least to UK resident dogs who we appear to have confused out of any reasonable seasonal coat growth pattern. It is July as I write this and the temperature has been bouncing around the mid to high 20s this past few weeks and I have dogs who are down to their underwear and dogs who have gloriously full coats. The same thing happens in winter.

Fact Five: Maria Callas has Nothing on Them

Huskies are mercurial creatures who can change in seconds from being so utterly standoffish you think you might have offended him, to a wildly, waggy furball who greets you with frantic relief after you’ve been in the shower for five minutes. I think this is largely because anything outside of their sled dog hard wiring (me run, pull, run), they are basically winging.

This consistent inconsistency extends to their vocal abilities. While generally the neighbour’s Jack Russell or Rottie will be 10 times noisier (and definitely more annoying), when a Siberian decides to exercise his vocal chords, you’re going to know about it. While huskies are not overly barky dogs (although they can and do bark at times, especially if unsure about something), they mostly like to sing. Like all amateur karaoke artists, not all of them are particularly good at it. While some produce a soulful, lilting howl, others sound like strangled cats (although in their heads I’m sure they are hearing the melodic call of the wildest wolf). Like wolves, however, Siberians tend to howl to call the pack together. As their pack usually includes you, you might find you’re greeted on the way in from work or sent on your way in the morning by a bit of a sing song.

As well as howling, they can be quite chatty and vocal in other ways. Happy Sibes like to tell you exactly how they are feeling with a wide range of wooing and will often engage in a very animated two way conversation with you.

As their level of excitement rises, so does the pitch. My own dogs are most excited about running and eating. Harnessing these dogs to run sometimes deafens you (thankfully we are in the middle of a forest at those times) and food preparation has to be carried out like a kitchen ninja before they hear a bit of kibble hit a metal dish and start to shriek their anticipation.

The bonus sixth fact is that in spite of all of the above, they will steal your heart. Yes, they might trash your garden, empty your bank account and cut down casual social visits to your home by about 90% but they will definitely and permanently steal your heart.